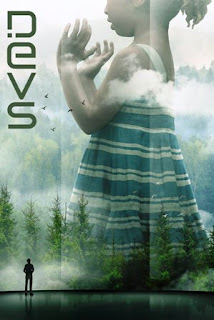 The first episode of Garland's latest kicks off giving a pretty good picture of what's to come. A meditative mood piece, with its somber tone, dissonant score, mesmerizing images and a brooding atmosphere; very much a wet dream of any serious cinephile.

Revealing much about the plot would do it disservice. Those familiar with the excellent "The OA Part II" will probably find some thematic similarities, although "Devs" is more on the sci-fi/tech side and less dense, plot and characterization-wise.

"Devs" manages to hold our attention to a considerable degree, with its intriguing story-line and hypnotic camerawork. At its core is a heartbreaking story of love, loss and an obsessive desire to overcome this loss. For those who crave some cerebral content in their cinema, there is a lot to chew on with its subject material and heavy verbiage concerning quantum physics, free will, the multiverse theory, the De Broglie–Bohm theory and what not! You will probably have to google all that up!

All this manages to keep us hooked, trying to make sense of everything that unfolds on screen as we relate the complex verbal exchanges to the progression of the story.

The trouble however starts glaring with Garland's casting choices and writing.

The female lead Sonoya Mizonu who is supposed to carry the entire show on her shoulders is god-awful with her singular expression and grating dialog delivery, and hence her presence mostly sticks out like a sore thumb. No matter how much you try to ignore her, you cannot, because she pretty much ruins every frame she is in. This makes it difficult to take her seriously or root for her as a lead character. Perhaps she is best suited for roles like she did in Ex-Machina (2014); Kyoko the robot!

Much of the exchange between her and the character of Jamie (Jin Ha) is cheesy and uninteresting, bordering on the cringeworthy. The dialog often tends to get repetitive, as if Garland is trying to fill up the per episode space of around 50 mins. There is also one particularly off-putting exposition-heavy sequence explaining the whole business as some primer textbook, in the latter half of the series. This sequence comes in a tad too late, when the more discerning viewer has already figured out what is happening and does not need another half hour to cover that aspect.

Some of the character actions seem completely out of place and clumsy in hindsight. For instance:

How could a hard-boiled spy sent in on a dangerous mission be so clumsy as to vomit and sob upon reading some lines of code, and attract attention? Why would he be so hasty as to try to steal something on the very first day of his engagement with Devs? Why not wait for an opportune moment?


Also baffling is the choice of a female actor to play the wunderkind Lyndon (Cailee Spaeny). She tries hard but comes off as awkward pretending to be a smart-ass geeky "boy".

The two actors who shine in the whole affair are Nick Offerman as Forest and Zach Grenier as Kenton, his loyal security in-charge. They add the much needed edge to the proceedings and make us cheer, their moral compasses notwithstanding.

Despite the shortcomings, "Devs" is certainly worth the ride. Check it out on Hulu or Hotstar.